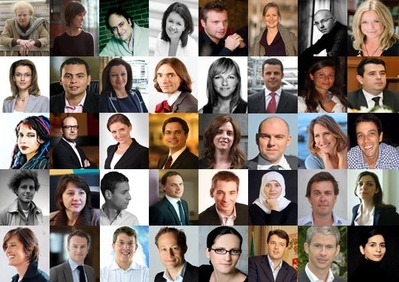 To revitalise Europe after the crisis, EuropaNova and Friends of Europe are launching the first fully European leadership program, the "40 under 40" European Young Leaders programme.

On the anniversary of the fall of the Berlin Wall, while the European Union is going through an unprecedented existential crisis, EuropaNova, the Paris-based “action tank” and Friends of Europe, the Brussels-based think tank, are launching a new type of leadership programme.

Inspired by the well-established American leadership programmes its aim is to create a new generation of European opinion leaders.

On 8-10 December 2011, the first seminar in the programme will bring together 40 exceptional candidates from across Europe and from all walks of life in order to promote a greater Europe and to reflect together on how to bring about a true European Renaissance. A second seminar will be held in June 2012 in Brussels.

The first selection of European Young Leaders was carefully chosen by a committee chaired by the Founder of the Franco-German television channel ARTE, Jérôme Clément, as well as personalities from all over Europe, including the President of France’s main television channel France Télévisions, Remy Pflimlin, Vice-President of the European Parliament, Isabelle Durant, and Maria João Rodrigues, expert on European issues and former Portuguese Minister for Labour.

Supported by the European Commission and other public and private partners, under the patronage of former President of Latvia Vaira Vike-Freiberga and Member of the European Parliament Daniel Cohn Bendit, the programme is led by EuropaNova and Friends of Europe.

EuropaNova is an “action-tank” founded in 2003 by Guillaume Klossa and young professionals who wanted to take concrete action, better inform Europeans and encourage direct dialogue between citizens and policy makers in the European Union. Its team consists of young professionals surrounded by experienced consultants with an in-depth knowledge of the European institutions and the various stakeholders in Europe.

Friends of Europe-Les Amis de l’Europe is a leading independent think tank that aims to stimulate thinking on the future of the EU. Our contribution has for over a decade been the confrontation of ideas that is so vital to policymaking and to encourage wider involvement in Europe's future. Via its events and reports it contributes to debate on all European issues. If Friends of Europe has become “a Brussels institution”, that is because it is so “un-Brussels-like”. We make Europe's policy choices lively and relevant to people outside the “charmed circle” of Eurocrats and involve member states policymakers, business, as well as civil society representatives in our initiatives.