The possibility of an EU equivalent to the US Terrorism Finance Tracking Programme (TFTP), as well as the safeguards to be included in the envisaged EU-US agreement were among the issues raised last week by Civil Liberties Committee MEPs in Washington DC. Parliament will vote on a resolution on Wednesday reiterating its conditions for approving a new agreement. On Thursday, US Vice-President Joe Biden will address the House.

The Delegation of the LIBE Committee with representation of all political Groups that took place in Washington DC between 28-30 April 2010 had meetings with US administration representatives and members of the US Congress in relation to the envisaged agreement between the European Union and the United States of America to make available to the United States Treasury Department financial messaging data to prevent and combat terrorism and terrorist financing.

Throughout the meetings the Members noted a strong spirit of cooperation and a willingness to engage in a constructive, innovative and determined way in order to strike a sound and mutual acceptable agreement.

Issues such as the determination to fight terrorism while upholding fundamental rights and the conviction that the framework of transatlantic cooperation for counter-terrorism purposes should be further developed and improved have also been raised. On behalf of the delegation, Parliament's rapporteur Jeanine Hennis-Plasschaert (ALDE, NL) reiterated the need to consider a twin-track approach which differentiates between, on the one hand, the strict safeguards to be included in the envisaged EU-US agreement, and, on the other, the fundamental longer-term policy decisions that the EU must address.

The delegation also recalled that the resolution on the Recommendation from the Commission to the Council to authorise the opening of negotiations for the above mentioned agreement is to be voted on 5 May 2010. The delegation expressed its trust that the EU and US are able to bridge their differences and find a strong, mutually beneficial agreement that will serve as a testament to the vital EU-US cooperation in counter-terrorism.

The delegation sincerely welcomes the address of Vice-President Joe Biden to the European Parliament on 6 May 2010. 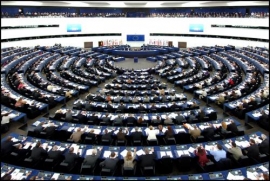