This procedure is the standard decision-making procedure used in the European Union, unless the treaties specifically state one of the special legislative procedures is to be applied to a particular subject. Before the Treaty of Lisbon came into force late 2009 it was referred to as the co-decision procedure. The essential characteristic of this procedure is that both the Council of Ministers as well as the European Parliament have a deciding vote in the legislative process, and both institutions may amend a proposal.

Roughly, the ordinary legislative procedure proceeds as follows: the European Commission submits a proposal. The European Parliament (EP) and Council of Ministers (Council) will either approve or amend the proposal. If EP and Council cannot reach an agreement on the proposed amendments both can amend the proposal a second time. If they still cannot reach an agreement they enter negotiations. After these are concluded both institutions can either vote in favour or against. 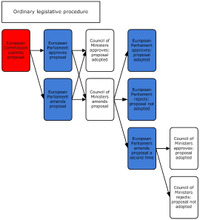 The European Commission submits a proposal to the Parliament and the Council.

The Parliament takes a vote on the proposal. There are two possible outcomes:

The - possibly amended - proposal is put before the Council. There are two possible outcomes:

The proposal as amended by the Council is submitted to Parliament. Parliament has four options:

If negotiations on an amended proposal are not concluded within six weeks, the proposal is rejected.

Both the Parliament and the Council have to decide on the amended proposal. They can either approve or reject the proposal, amendments are not permitted.

In their respective policy areas the European Economic and Social Committee, the Committee of the Regions, the European Central Bank and the Court of Auditors have to be consulted on proposals before Parliament and Council can finalise their decision-procedures in the first reading.

By means of this procedure a member state can request the Council to suspend the legislative process. The proposal is then put to the European Council.

The emergency break procedure can only be invoked for fundamental proposals in a limited number of policy areas (foreign and defence policy, social security, judicial cooperation in criminal matters).

Voting procedures, the right of amendment and the rules on adopting or rejecting a proposal remain the same.

The policy areas this exception can be applied to are:

Application of the ordinary legislative procedure

Other important policy areas where the ordinary legislative procedure is not used are institutional reforms, tax policy, a fair share of social policies and a number of areas in the field of justice and home affairs.

In practice, most proposals are adopted at first reading. The reason for this is that the European institutions hold extensive deliberations before the Commission formally submits a proposal.